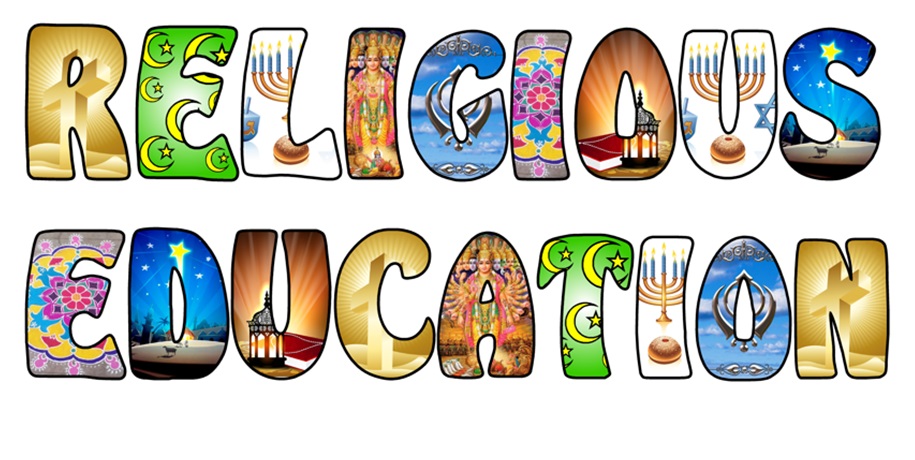 Using enquiry-based learning, the syllabus provides a coherent framework to allow for deeper levels of knowledge and understanding of religious and non-religious life stances, and to develop respect and sensitivity, so that, as future citizens, the children will value and celebrate cultural and religious diversity, in peaceful co-existence. It also provides opportunities for pupils to explore their own beliefs, values and traditions.

Aims
The Agreed Syllabus aims to:

• acquire and develop knowledge and understanding of Christianity and the other principal religions and world views represented in the United Kingdom;

• develop an understanding of the influence of the beliefs, values and traditions on individuals, communities, societies and cultures;

• develop attitudes of respect towards other people who hold views and beliefs different from their own;

• develop the ability to make reasoned and informed judgements about religious issues, with reference to the principal religions and world views represented locally and in the United Kingdom

The aims from the 'Understanding Christianity' document are:

• To enable pupils to know about and understand Christianity as a living world faith, by exploring core
theological concepts.
• To enable pupils to develop knowledge and skills in making sense of biblical texts and understanding
their impact in the lives of Christians.
• To develop pupils’ abilities to connect, critically reflect upon, evaluate and apply their learning to
their own growing understanding of religion and belief (particularly Christianity), of themselves, the
world and human experience.

Content
The are Two Attainment Targets which support the aims of the subject Religious Education must be relevant to pupils’ own personal development and awareness.
AT1 - LEARNING ABOUT RELIGION AND BELIEF
Enquiring into, investigating and understanding religions and beliefs. This includes thinking about and interpreting religious beliefs, teachings, sources, practices, ways of life and ways of expressing meaning with reference to the specific beliefs and religions studied.
AT2 - LEARNING FROM RELIGION AND BELIEF
Questioning, exploring, reflecting upon and interpreting human experience in the light of religions and beliefs studied. This includes communicating reflections, responses and evaluations about questions of identity, belonging, diversity, meaning, purpose, truth, values and commitments, making increasingly insightful links to the specific religions studied.

Key Stage 1
Pupils are taught to:
• explore a range of religious stories and sacred writings and talk about their meanings
• name and explore a range of celebrations, worship and rituals in religion, noting similarities where appropriate
• identify the importance, for some people, of belonging to a religion and recognise the difference this makes to their lives
• explore how religious beliefs and ideas can be expressed through the arts and communicate
their responses
• identify and suggest meanings for religious symbols and begin to use a range of religious terms and ideas.
• reflect on and consider religious and spiritual feelings, experiences and concepts such as worship, wonder, praise, thanks, joy and sadness
• ask and respond imaginatively to ethical questions, communicating their ideas
• identify what matters to them and others, including those with religious commitments, and communicate their responses
• reflect on how spiritual and moral values relate to their own behaviour
• recognise that religious teachings and ideas make a difference to individuals, families and the local community.

Key Stage 2
Pupils are taught to:
• describe the key aspects of religions, especially people, stories and traditions that influence beliefs and values
• describe the variety of practices and ways of life in religions and understand how these stem from, and are closely connected to, beliefs and teachings
• identify and begin to describe the similarities and the differences between religions
• investigate the significance of religion in the local, national and global communities
• consider the meaning of a range of forms of religious expression, understand why they are important in religion and note links between them
• describe and understand religious and other responses to ultimate and ethical questions
• use specialist vocabulary in communicating their knowledge and understanding
• use and interpret information about religions from a range of sources.
• reflect on what it means to belong to a faith community, communicating their own and others’ responses
• respond to the challenges of commitment both in their own lives and within religious traditions, recognising how commitment to a religion is shown in a variety of ways
• discuss their own and other’s views of religious truth and belief, expressing their own ideas
• reflect on right and wrong and their own and others’ responses to them
• reflect on personal beliefs in their own and others’ lives.
Areas of study Creation, Incarnation, Salvation, God, Gospel, Islam, Judaism,  Buddhism, Christians around the world, Good and evil, Hindu beliefs

RE Statement of Entitlement for Church Schools